At the Geneva Motor Show of 2014, Audi fans could get acquainted with the new Audi TT, a model already available to order today. The car also comes with a high-performance version, the TTS, but it’s the TT we’ll be talking about. Read to find out details about its appearance, performance, aspect, specs and pricing.

It may not be revolutionary, but it is the re-engineered and re-designed TT. This new Audi TT surprises us with a different grille, a fully updated interior and a superior engine. Its weight-saving features make it more economical and cheaper to drive around. 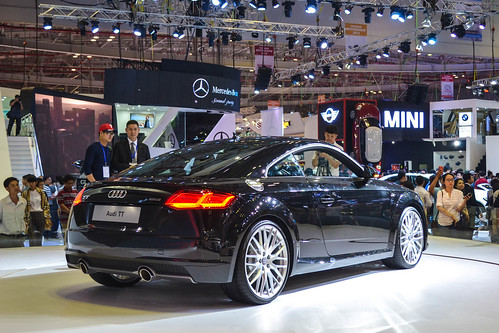 The Audi TT range to be launched features the same iconic exterior with some surprising re-interpretations. The overall styling leaves the impression of a well polished car. The headlights are Xenon Plus, but can be replaced with the new LED Matrix version. Another design aspect that recommends this model is the quad tail pipes, common only to the superior Audi models, with air vents in ‘jet engine’ style.

The new angular grille is the most striking element of the new design. The slim shape of headlights represents another step forward towards a very sporty and alluring look, also looking angry and edgy. The total length is pretty much the same with that of the previous model: 4.18m. Also, there is a lot less of overhanging parts in the design.

Besides being a front-wheel drive, the new TT is also lightweight, it’s quicker to drive and thus more economical, too. The new chassis is made of highly resistant steel alloys and is lighter. The upper parts are made of aluminum.
The driver feels in control thanks to the improved steering wheel functions and to the intuitive virtual cockpit that is easily operated without having to look away from the road. Plus, the headlights adapt to the surroundings. The basic model has a six speed manual that can be replaced with the advanced automatic one.

The best in the range is a turbocharged petrol engine model with the S Tronic gearbox and four-wheel drive. This one goes up to 227bhp and is priced at a hefty £35, 335. This is the Audi TTS – available to order since October 2014 and to be delivered in March 2015.

The Basic Engines – Diesel and Petrol

The new Audi vehicles benefit of the current VW Group range engines. The basic Audi TT has a turbocharged 2.0-litre diesel engine that comes from the Golf GTD. It takes 7.1 seconds to get from 0 to 62 mph. Emissions are estimated at 110g/km.

The petrol version is also a 2.0 turbocharged one with quicker acceleration, taking it from 0 to 62mph in 6 seconds straight. The performance comes with higher emissions though, the number standing at 137g/km. While the diesel model lowers your yearly tax for carbon emissions to £20, the petrol one makes it soar to £130.

The Audi TT line comes with a virtual cockpit that sets new standards. The dashboard is packed with high-tech features and has a large display of 12.3 inches. The functionality of the screen had led to a reduction in the number of buttons on the board. Depending on their control needs, buyers are allowed to customise this screen, focusing on the functionality they desire or are more comfortable with. The system was created in partnership with Nvidia. Besides what’s on screen, there are more intuitive features packed inside the car, such as the air conditioning controls, placed right on the vents. The vehicle is also equipped with an incorporated top-class Bang & Olufsen sound system. The electro-mechanical steering is a new addition as well – it is progressive and renders the car more agile, assisting the self-parking.

As we’ve already had the chance to detail, there are significant improvements to the board of the car and its customisable display. Thanks to it, the dashboard now looks very neat, with many of the usual buttons gone and loads of clean lines and surfaces.
The car is still a 2+2, albeit one with improved leg room in the back and a larger boot area. The longer wheelbase allows for more space inside the car, with a boot that’s 13 litres larger (a total of 305 litres). The roof is low and descends towards the rear end with a slight inclination which points to the more futuristic models.

The Audi TT Coupe Sport is said to be the cheapest one in the series. Equipped with a turbocharged 2.0-litre ultra diesel engine, it emits little CO2, which lowers the yearly tax considerably (estimated at £20). In contrast with this, the output stands at a strong 182bhp. The six-speed gearbox is manual.

When Is It Available?

New Audi TT Coupe is now available to order and UK deliveries have already begun. The other TT versions are also available to order but the first deliveries are expected in early 2015.
While the starting price for the first customers was of £26,000, at this point the basic Audi can be purchased for £29,770. The 310PS TTS model is priced from £38,790 and if you want to go for the TT Roadster its pricing starts at £31,955 for the entry level model.

The new Audi TT does contain a lot of stunning technology, but much of this may not be all that useful. In any case, it will take a while to get used to it. Owners might enjoy however, the benefits of an interactive system. Driving is rapid and very secure and the car makes better use of space than previous Audi models. Add the sharp image, appealing style and true cabin quality and you have a desirable purchase. The rear seats may need some improvement, but overall Audi expects to make nice sale numbers with this freshly re-imagined line.

Author’s Bio
This article is contributed by motordepot.co.uk, a car supermarket where you can buy a high quality, affordable used cars.

Looking to sell your old Audi to buy a new one? Don’t waste money part exchanging your car as you will get a better deal with us. Get your free valuation for your old car below.